USA it seems is in a league of its own. Call it ignorance or arrogance, for the mighty shall not fall predilection been blown to tethers by the underdog corona spitting vehemence against mighty and puny alike. It knows no barriers, doesn’t distinguish between the rich and the poor and treats every cast and creed alike, with death. First, it was a hastily declared antidote which seems to be of little use if ever increasing victim counts are to be taken into account, 1095304 cases in all, ACTIVE: 875696, DEATHS: 63871 and RECOVERIES: 155737 and secondly, a hurried press conference to announce victory against the invincible, President Trump has been going all wrong. The U.S. has more confirmed cases of the coronavirus than any country in the world, surpassing China by a huge margin, where the pandemic began. Experts see a similarity in the trend of virus upsurge for both USA and India and fear the Indian epidemic might go the American way. Here, I have tried to analyze some of the WHO statistical modelling for Covid-19 which aims to predict and forecast COVID-19 cases, deaths, and recoveries through predictive modelling in the case of non-pharmaceutical intervention (NPI).

The effect of control strategies to reduce social mixing on outcomes of the COVID-19 epidemic in Wuhan, China: a modelling study

This model examined how changes in population mixing affected outbreak progression in Wuhan, by using synthetic location-specific contact patterns and adapted these in the presence of school closures, extended workplace closures, and a reduction in mixing in the general community. The projections showed that physical distancing measures were most effective if the staggered return to work was at the beginning of April; this reduced the median number of infections by more than 92% (IQR 66–97) and 24% (13–90) in mid-2020 and end-2020, respectively. There are benefits to sustaining these measures until April in terms of delaying and reducing the height of the peak, median epidemic size at end-2020, and affording health-care systems more time to expand and respond. However, the modelled effects of physical distancing measures vary by the duration of infectiousness.

This model fitted available data from China and Italy. Key parameters included were force of infection, age and gender-specific infection rates, severe infection, and case-fatality rates. Seasonality was assumed based on the idea that most respiratory infections decline in the summer and although COVID-19’s temperature and humidity are not well understood, it was reasonably assumed that some characteristics of seasonal influenza apply here.

The scenarios taken were:

This model focusses on two fundamental strategies possible: (a) mitigation, which focuses on slowing but not necessarily stopping epidemic spread – reducing peak healthcare demand while protecting those most at risk of severe disease from infection, and (b) suppression, which aims to reverse epidemic growth, reducing case numbers to low levels and maintaining that situation indefinitely. It goes on with its findings that optimal mitigation policies (combining home isolation of suspect cases, home quarantine of those living in the same household as suspect cases, and social distancing of the elderly and others at most risk of severe disease) might reduce peak healthcare demand by 2/3 and deaths by half. However, the resulting mitigated epidemic would still likely result in hundreds of thousands of deaths and health systems (most notably intensive care units) being overwhelmed many times over.

FINDINGS – Almost all the studies observed, though has its uniqueness in respect to geographical locations and demographic trends, however has certain similarities which brings about a conclusive evidence.

COVID-19 still torments one and all as a mysterious disease and medics around the world are still unclear about its infectiousness syndrome, which means we can only obtain an accurate prediction after the outbreak ends. The outbreak spreads are largely influenced by each country’s policy and social responsibility. As data transparency is crucial inside the government, it is also our responsibility not to spread unverified news and to remain calm in this situation. Healthcare facilities in India is yet to be at its best with a meagre 0.7 hospital beds per 1000 people in comparison to 3.2, 2.8 and 4.3 for Italy, US and China respectively. Clearly, with a bed-population ratio of nearly 1:1000, and  with around one million hospital beds and less than 1,00,000 intensive care unit (ICU) beds, India is hardly prepared to confront even a moderate surge. The models analyzed has shown the importance of information dissemination that can help in improving response time, and help planning in advance to help reduce risk. Further studies need to be done to help contain the outbreak as soon as possible. 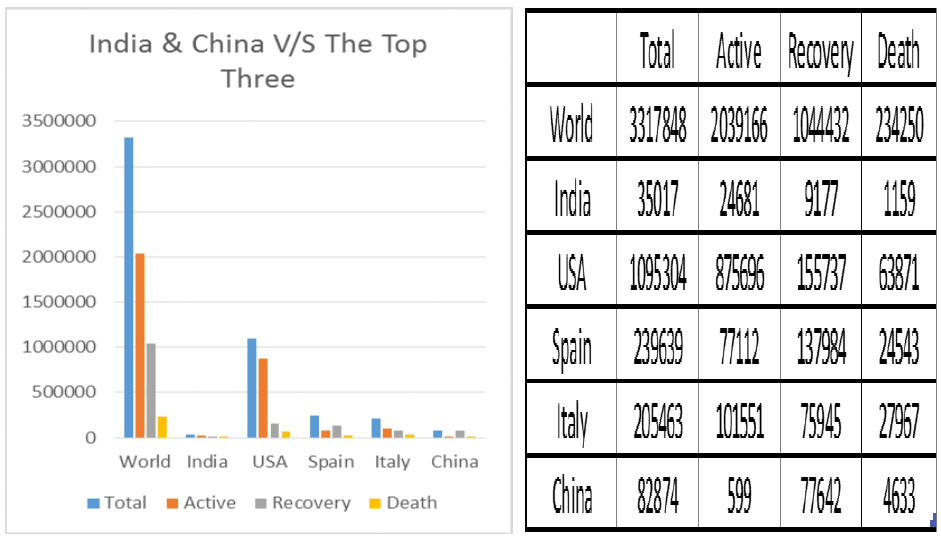